Vin Diesel famous bald actor whose real name is Mark Sinclair Vincent.
Born in New York city with Italian and African American ancestry and having never met his biological father was raised by his step father Irving an acting and theatre producer. 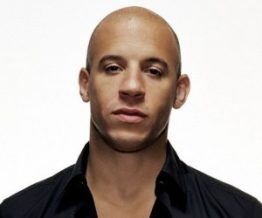 Role as Richard B. Riddick in The Chronicles of Riddick movie series.

Role as Dominic Toretto in the Fast and the Furious movie franchise.

None but we thought you may like to view his Facebook page that has a massive following of over 90 million people.

Vin’s partner is Mexican model Paloma Jiménez. They are not officially married but have been together since 2007 and have 3 children together – Hania Riley (born April 2008), son Vincent Sinclair (born 2010) and daughter Pauline (born March 2015).

Vin diesel had his stage debut at the age of seven (7) in a children’s play ‘ Dinosaur Door ‘ .

His motion picture Debut was in the 1990 movie Awakenings.

His first breakthrough as a screen writer / director for short film ‘ Multi Facial ‘ which was featured at the Cannes  film festival in 1995.

He also loves dungeons and Dragons and World Of Warcraft games.

Diesel’s career didn’t start that easy. He went through financial problems as many actors do before their first big screen movie break.

Vin Diesel has given justice to all the characters he has portrayed and gave new image to a movie superhero that caught many movie fanatic’s attention which helped him gain international fame and fortune.

The bald movie star is very much in demand not only for his acting skills but for his off screen writing, directing and producing with over 14 Hollywood movies produced and co-produced by Vin.

Who do you think is the sexiest bald actor? Hmmmm…Vin Diesel? I dare say 99.9% of the female population will agree. Let us know what you think. Leave your comments below.

Being bald added to the charisma of this multifaceted actor. Good looks combined with exceptional talent brought Diesel to the world of movies, film producing and directing.
Vin Diesel an actor that is strikingly bald !