Ronald William Howard is a Hollywood film director and former actor best known for his role as ‘Opie Taylor’ on the Andy Griffith Show which aired on CBS from 8th October 1960 – April 1st 1968.

His is also known for his acting role as ‘Richie Cunningham’ in 70’s – 80’s Television sitcom ‘Happy Days’.

His ginger hair was noticeably thinning on top at the 1992 Cannes film festival.
The bald director was at Cannes that year for the 1992 movie he directed and produced ‘Far and Away’ starring Tom Cruise and Nicole Kidman. The film was shown at the closing of the festival.
Photos of Ron Howard at the time show him with a ‘comb over’ type hair style.

Ron Howard although nowadays completely bald on top still likes to keep growing his hair on the sides and the back of his head. In my honest opinion, the style really suits him.

He can sometimes be seen sporting some kind of manly facial hair. Lately a short, neatly kept beard that is ginger and grey in colour. 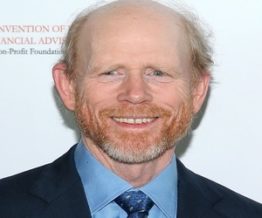 Ron Howard’s mother ‘Jean Speegle Howard’ a former actor herself was suggested, by his father ‘Rance Howard’, to play role as Jim Lovells (Tom Hanks) mother in the 1995 blockbuster motion picture ‘Apollo 13’ which Ron directed. Ron agreed. The scene only took two takes for his mother Jean to complete, a directors dream.

I came by, she was nervous, and had a little housecoat and was prepared to do it. And we went through it a couple times and she made me cry just because I was proud of her as a son, but also I saw that she could do it and this was an opportunity.”