Bruce’s mother Marlene Willison worked in a bank. Bruce the eldest of four siblings – sister Florence, brother David and oldest brother Robert. Sad to hear Robert died of pancreatic cancer in 2001 at the age of 42.

Most famous for the 80’s TV series Moonlighting and the Die Hard Hollywood movies franchise. 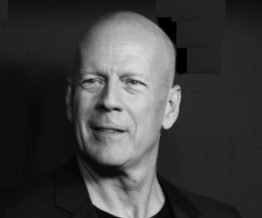 Had a problem with stuttering up until the age of around 9 years old. At school Bruce got a part in a play called ‘Connecticut Yankee in King Arthur’s Court’. When he stepped out on stage he realised one thing, his stuttering disappeared, the rest is history.

Other interesting facts about Bruce Willis is that he always wears watches the wrong way around ie; the face of the watch facing down on his wrist.

On February 26, 2003 Bruce was scheduled to appear as a guest on the ‘Late Show with David Letterman’ but after suffering an eye injury Dave had to be rushed to hospital. Bruce came to the rescue and hosted the show in Dave’s absence. Guests on the show that night included Carmen Electra, Dan Rather and John Mayer. It was Letterman’s first sick day off in 20 years but all went smoothly thanks to Bruce.